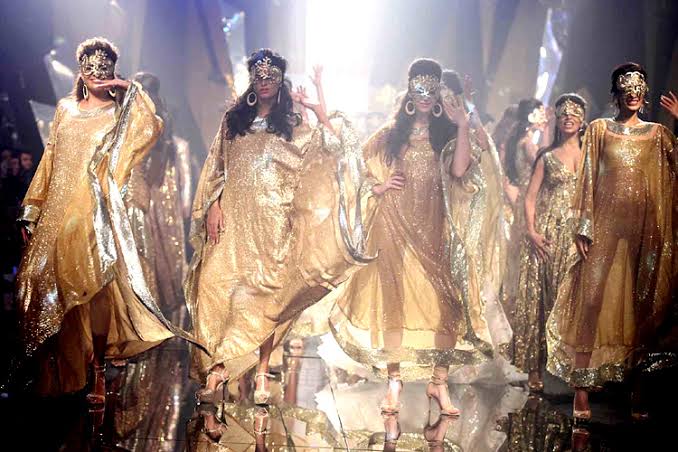 Disco strobe lights, gold tints and jagged mirror structures offset a granite flooring – disco beats from 80s Bollywood set the pace as models descended on the ramp in shimmering gold outfits, playfully interacting with the spell-bound audience. This was the scene for the highly anticipated Opening show from veteran designers Abu Jani and Sandeep Khosla – Jawani Janeman – from the Lakme Fashion Week 2015 Winter/Festive.

Held this Tuesday at the Palladium Hotel in Mumbai, the show, which took an inspiration from the hit Parveen Babi number from Namak Halaal, gave a bow to retro bling couture – gold, bling, mirror work, sequins and chunky embellishments artfully held together on sheer nude, pastels, cream and white.

In a release ahead of the event, Sandeep Khosla said, “This season we reinvented the traditional to present an exciting, fresh take on fashion deemed fit for the youth. We thought of retro as a theme. The idea came to us when we were watching television and this particular song was being played.”

The show was high on drama as models walked up to the audience on both sides of the ramp to provide a closer look of the designs. The attitude remained saucy, playful with moments crafted to show that this was all about a bolder, edgier youth – one who was confident about their feminine appeal and know that it is appreciated. And it showed in the work as well. Ruffles created high drama in both shorter outfits as well as a male sheer shirt and blouse for high on gold bling saree.

Long bridal skirts in grey, pastel blue, pink, cream and white made an appearance, as a base palette to the Zardozi detailed work as well as the signature mirror work that they are known for. There were also heavy gold disc embellishments on saree jumpsuits, jumpsuits, heavy traditional attire on one end, supplemented with embellishments on sheer and net on fitted blouses. Fitted top-to-toe creations were interspersed with full length capes.

One of the notable pieces was the white sequined, fitted jumpsuit adorned by model Jesse Randhawa, which was encrusted with heavy crystals in green, blue, yellow and red on top of the garment.

The designer duo had a lot to offer in menswear too – embellished lapels on opulent cream gold fabrics, sheer side panels on trousers, transparent plastic on shoes as well as a full-length Zardozi kurta for occasion wear. Pastel nude was spotted on all shoes for women too.

Bollywood was in attendance too to show support to the veteran duo – from Jaya Bachchan to Dimple Kapadia, Sonali Bendre to Twinkle Khanna. Mumbai’s social elite cheered the show from the front row too.

Join 195 other subscribers
Follow Slices from Life on WordPress.com