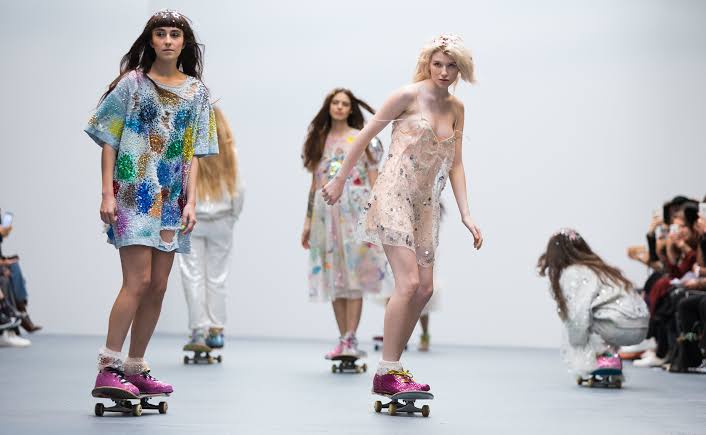 London Fashion Week, one of the coveted big four fashion weeks in the world, was the central focus this week for all: from editors and stylists to fashionistas hanging on to trend reports. And what we saw this time around was a pop of teen summer enthusiasm, gliding in on skateboards at Somerset House.

A disclaimer here: Contrary to our desi Fashion Weeks, those held in London, Milan and Paris run a year ahead in cycle, so what are seen, discussed, sold and deciphered, are trends that work a year in advance.

Designer Ashish Gupta, who completed a decade of showing his work at the London Fashion Week Spring-Summer 2016, is an Indian connection that the fashion capital has cherished ever since. While the fashion world is still taking stock of the week (see: Tanya Rivero from WSJ for one side of the story to Daniela Di Napoli from Chron for the other), his show on Tuesday, September 22, has been ‘the most fun ever’!

Originally from Delhi, the Central St Martins alumni began his tryst with London when he came for his MA here. In 2000, his plans for instant design stardom hit a roadblock and left him designing for friends for a year. However, he got his first big order in 2001 from Browns Focus and slowly built his way towards taking the stage at LFW in 2005.

Under his self-titled label, Ashish’s work is largely a homage to sequins, which he considers an art form. His work has been spotted on pop personalities like Miley Cyrus, Beyonce, Ciara and Madonna.

What’s with his collection?

Sequins on tracksuits, capes and dresses; sheer tops with bright pops of colour, large heart cutouts on a naval two-piece, a denim jumpsuit that looked inspired by the Indian saree, frills and above all – a devil may care attitude, that’s what Ashish delivered for Spring-Summer 2016. Bright, glittery shoes (from sneakers on women to pumps on men) completed the look.

Onstage drama perfectly complimented these designs – the models glided on to the ramp on skateboards, with sequins as accessories for hair as well as makeup. Men who cross-dressed had the attitude up to super-high, while the girls really couldn’t care where their straps went.

Points to take back

While the mood of this particular show has been more towards youth, we think it can be easily adopted on Indian shores, both by the intended target group, as well as the hip-hop segment looking to pop up their street style.

To those who wish to catch the show, watch this video by the British Fashion Council

Join 195 other subscribers
Follow Slices from Life on WordPress.com