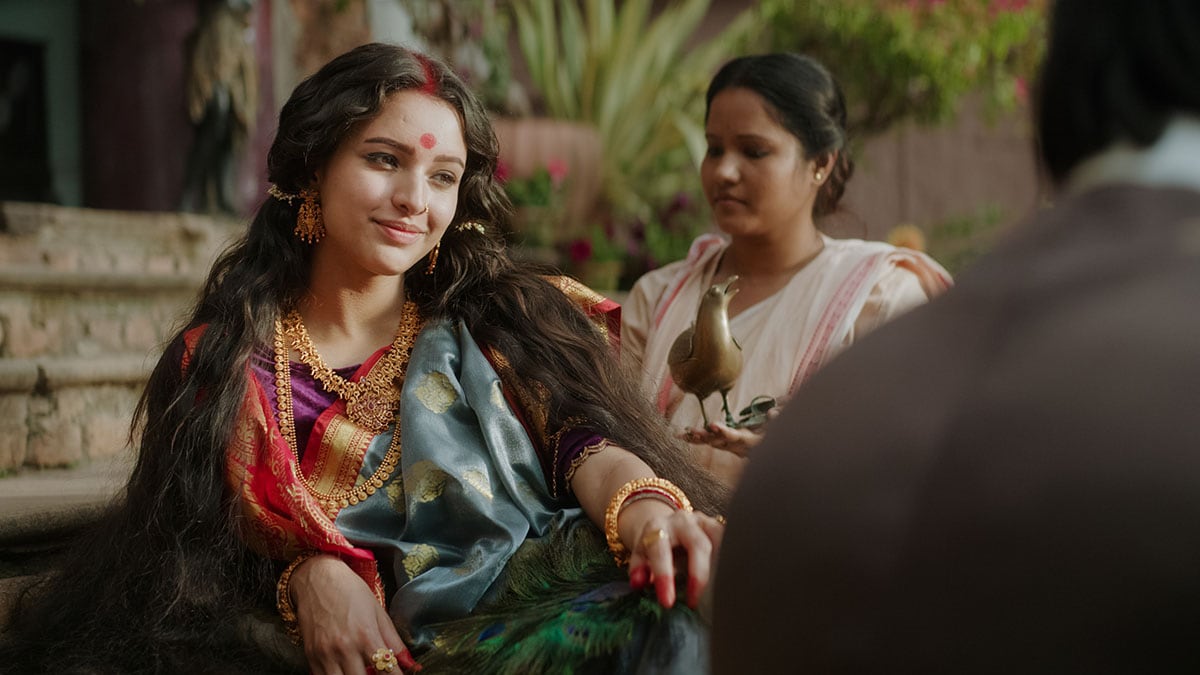 Imagine walking into a painted rendition of Guru Dutt’s epic ‘Sahib, Biwi Aur Ghulam’, where the Zamindar women are expected to live the glam life and not be heard. Bulbbul, with each high-detailed frame and colour, is that picture, trying to pitch in a feminine femme fatal, a wronged woman.

The long binge days and nights during the COVID-impacted 2020 has had me viewing more than a fair share of fantasy and other video content. So, when I saw the trailer for Anvita Dutta’s ‘Bulbbul’ in the Coming Soon segment, I was definitely piqued to know more. Would it be the dark period horror around the ‘ulte paeron wali chudail’, a goosebumpy ride or something more.

In this movie review for Netflix’s ‘Bulbbul’, the second fantasy piece from actor Anushka Sharma’s ‘Clean Slate Films’ stable (the first being ‘Pari), I’ll lay down what I liked and didn’t (trying to keep spoiler-free here).

Before I begin, here’s a mood for the day, indeed!

Streaming on Netflix, Bulbul is a tale set in Zamindar-era 1881, of a child-bride who finds a companion in her young brother-in-law, as she is brought to the big Haveli as the elder Thakur’s Thakurayin.

The film keeps abreast with shifting narrative timezones, splicing an idyllic childhood spent amid mango groves and daylight shots, to a dangerous present, bathed in the proverbial (and literal) red.

Here are  five things I liked about this film:

From the introduction, the fairytale that Anvita Dutta weaves with her scenes, lifts you into a world of idyllic lore, possibly true to those days (have heard many complaints about deviations from the Bengal residency days, so can’t say for sure.

The child-bride Bulbbul, happy climbing trees, the sense of wonder in finding a companion, hide and seek games endear you to the scene immediately and keep you reeled in, even when the plot takes literal leaps of faith.

The best part about a good story is that it does not look down on its audience and expositions everything for the viewer. And that’s where Bulbbul shines. You don’t need jump cuts, eerie music or ghoul-like Chudails to say horror in India – there are plenty of things around that spook us in real life.

Bulbbul picks its weapons carefully and weaves them in without going out of its dream-like daze. Domestic violence, child abuse and objectification – scary, scary things indeed, especially when we know that these are still here, more than 140 years after the supposed timeframe of this story.

You see them in soft bruises, in reports of women ‘falling down the stairs’ and in the moment when Rahul Bose (spoiler alert) descends into madness, lifting a bolt high in the air.

As a director who’s had strong literary roots, Anvita brings her grasp of details with the meaning in each and every scene. Her strong women, who acts as foils to each other (rather than victims of their circumstances), act, react and think on ways to gain each little piece of the pie for themselves.

The switch from the innocent child bride to a worldly woman, the Badi Thukariyan in Dimri’s case, matches in beat with the machinations of the Choti Bahu, Binodini (played with sheer joy by Paoli Dam). She reigns with charisma rather than turn into a wallflower or wilt away, waiting for the absentee Thakur to return.

There are swathes of evidence in plain sight, though the film does ask for a rewatch to unpack all the material. For the vigilante, who rises from her revenge rape, the now-widowed, bruised woman with a faint smile, the only house with a flight of steps… And the backwards feet have a story too.

The best part for Bulbbul is the sheer attention to the framing for each scene, the addition of expansive locations – the majestic haveli, the ancient temple, the mango groves and the blood moon.

Each scene transposes you into the realm of Sanjay Leela Bhansali, though not without an eerie sense of unease. Blame it on the marketing of this folklore tale as a horror / supernatural tale, or the comparisons to producer Anushka Sharma’s previous fairytale, Pari – the film came in with a set of expectations as high as a mountain.

Instead, take my word for it and let each scene immerse you into its drenched, dark realm – from beautiful mornings near the fountain with marble pigeons to dark nights lit by the proverbial and literal blood moon. Each character, each scene, each dialogue deserves a slow moment to savour its taste.

So, who’s the real Chudail – the free woman, the one outside anyone’s ‘Vash’, who needs a set of toerings (Bichueye) to stay rooted to the ground. The idea of Chudail from Bulbbul is a deeper look at the concepts associated with Indian witchcraft lore.

Is she every wronged woman, who raises her gaze? Everyone who raises her voice or chooses not to conform? The idea of a woman’s identity is the biggest thought experiment within ‘Bulbbul’ and the best reason to view the film, at least twice.

UPDATE: Got another piece of unpacking from Sucharita Tyagi’s Not A Review about Chudail mythology. The Chudail costume comes from the Bengali myth of Dakini, a woman who had been wronged and comes back to life with Kali’s blessings. The Dakini is a force of vengeance, against all those who wronged her or who wrong others.

‘Bulbbul’ has been a divisive viewing experience for most, with people either loving it or hating it. And the reason behind this is the way the film stands as a celebration of its own self.

This, sadly, takes away from the potential to write a very gripping, tight plot and build a strong horror story. In fact, if I compare ‘Bulbbul’ with the other two women-centric, smart, supernatural films (Pari and Stree), she’s neither as macabre and ominous as the first nor as tongue in cheek as the other. She is a slow drama and that doesn’t hold for most people.

Note: While I did watch the film with my young one, it’s not ideally a film with a parental angle, at least not one I’d prescribe as a parental ideal for us. The revisionist approach and gunslinger verdicts for the guilty are a problematic way to handle a very, very real problem, even if they feel satisfying at the points when they enter the scene.

‘Unleashing Kali’ ain’t the story I’d tell my little one, even though I cheered for her all the way!

PS: Like my style? Read more of my film reviews in my section for them, ‘Binge-watcher Mommy‘. Otherwise, do leave your thoughts in the comments below!

Join 195 other followers
Follow Slices from Life on WordPress.com